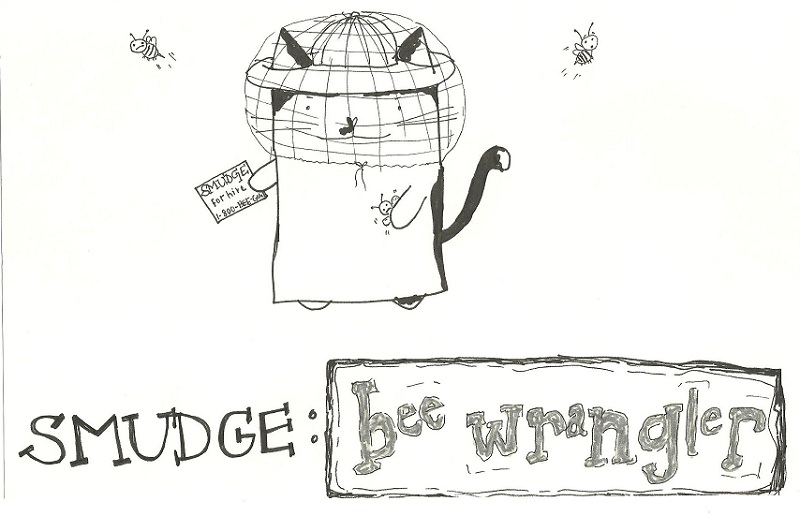 When it gets nice outside, we like to let the cats roam the wilderness, explore their wild sides, and get back to their roots.  By this I mean, of course, we let them sit on the deck…three stories up.  You’d think that the height would deter any wacky behaviors but we’ve had to grab ’em up more times than I’d like to count for squeezing through the railings to attempt to pose precariously on the mini ledge there or trying to leap onto the handrail.  Really cats?  Where you do think you’re gonna go?  And when you do, do you think I’m going to go run downstairs to save you?  Ok, I would.  But still.

We have tried to put them in harnesses many times for a more structured exploration of the out-of-doors, which is another tale for another time.  However, you’d imagine they kind of get the whole “we’re not on the ground this time, but rather three stories up.”  Buuuuuuuuut, they don’t always.

Aaaaanyway.  When they safari outside, they don’t always mess about with hijinks; they do have some deck appropriate activities. (P.S. Did you know that hijinks is a variation of “high jinks?”  What the heck?  I guess it would make a little more sense if I knew what jinks were.)

Often Duncan likes to eat the very plant leaves that give him the runs.  So fun, Duncan.  When will you ever learn?  I guess this actually was a bad example of deck appropriate activities because I hate having to chase him around repeatedly but he just can’t get enough of the stupid plant.  I suppose I would rather deal with this than a broken cat on the ground, though.

Smudge, however, has actually acquired a meaningful set of skills that will make him a valuable asset to our deck sitting community.

Smudge is a Bee-Wrangler.  He likes to pounce on bees and then….well, that’s about it.  He doesn’t really do anything with them except avoid being stung.  Lucky for him, with that bee colony living in our deck he could wrangle bees all summer long last year!  I’m hoping for our sake that this hobby of his is forced into retirement due to lack of bees, but this really is only one of the few things he has going for him, so I suppose I shouldn’t wish too hard for not enough bees.

On a side note, I have a colleague who actually is a bee keeper!  I was at her house this weekend and was amazed and astounded with being inches from three bee hives.  Smudge would have been super excited but I think my friend would not have liked her bees to be put in peril with the presence of a skilled bee wrangler.

Sorry Smudge, no field trips to the beehives for you.

2 thoughts on “You, too, can have a cat with valuable skills.”